Title:
Put Your Head Above The Parakeets EP

Tracklist:
A1.
Head Above The Parakeets

A2.
Rotating In Unison

B2.
Bass Is The Place

Press Info:
Put Your Head Above The Parakeets is a brand new EP from HAAi, her second for Mute. The EP features 4 brand new tracks including the pseudo title track ‘Head Above The Parakeets’ which exudes a woozy summery heat while ‘Rotating in Unison’ embraces positivity, written in response to this year’s enforced slowdown. The final 2 tracks take us back to the club, where HAAi is known for spinning genre bending and spellbinding DJ sets.

“Head Above The Parakeets”

Recommendation:
HAAi’s “Systems Up, Windows Down EP” on Mute 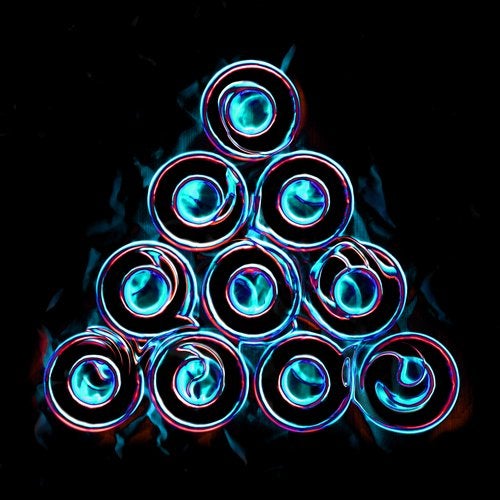 Title:
Higher Up The Spiral

13.
Higher Up The Spiral

Press Info:
Nicolas Bougaïeff has released a selection of remixes ahead of the launch of his forthcoming album, The Upward Spiral – out on vinyl and digitally on 24 July 2020.

Japanese born, Berlin based Kosei Fukuda, British producer Sam KDC, Din-ST aka Frederic Stader and British techno artist Benjamin Damage individually take either the creeping mutation of ‘Nexus’ or the nosebleed kicks and synth bleeps of ‘Thalassophobia’ as their starting point for this four-track EP, out now.

The original versions of Nexus and Thalassophobia both appear on The Upward Spiral, due out on Mute later this month. On the new album Bougaïeff reframes familiar tropes for his own mind-expanding vision of body music. Punishing industrial techno charges the album at surface level with beautiful-meets-bleak energy. But peel back the layers of brash ferocity, and there’s a hell of a lot more going on than first meets the ear. The culmination of years of hard work, Bougaïeff grew the album from the seeds of a bespoke composition technique; a carefully thought-out studio experiment in how to bend a love of techno into innovative new shapes.

Across nine metallic misadventures, which Bougaïeff describes as “little open scores”, he blitzes drum patterns and sharp synthwork into a satisfyingly effective blend. Intricate rhythmic structures lurk beneath the “strawberry jam” of the surface aesthetics. This rhythmic illusion seeps into every crevice of a record that brings a slice of academia to the rave.

This new album continues his decades-long love of club music, a love that has compelled Bougaïeff to challenge conventional wisdom, delivering genre-busting Berghain sets that expertly blend French-Canadian hip-hop with Tchaikovsky, moody techno and ambient. Previous releases include the Cognitive Resonance EP that relaunched the NovaMute imprint in 2017.

A2.
Dusting For Smoke

B1.
After The Fire

B2.
Into The Arms Of Stillness

B6.
One More Morning

Press Info:
Daniel Avery returns with his third full-length album, Love + Light, a surprise release out now via Phantasy worldwide and Phantasy/Mute in the United States and Canada on all digital platforms, with ethereal artwork taken from an image by Avery’s tour photographer Keffer. A limited vinyl and CD release will follow, which you can pre-order now.

Love + Light arrives unexpectedly, following Avery’s recent collaborations with Alessandro Cortini on the critically acclaimed Illusion of Time LP (“a record that suggests Godspeed You! Black Emperor in drone mode, reimagining Music For Airports as if the runways were covered in gravel and air traffic control was on strike,” said Loud & Quiet, while Q hailed it “lush mood music to get lost in”) and alongside Roman Flügel under the alias of Noun. Avery’s previous solo album Song For Alpha was released in 2018 to similar acclaim.

Avery shares, “This record has been a real positive force of energy in my life, to the point where it almost formed itself in front of me. In that same spirit, I wanted to share it with you now, as soon as it was finished. As I started to collect the pieces together, it was apparent that the album would be split into two distinct halves but halves that were inexorably tied together. One could not have existed without the other. Music has always been a source of personal strength for me yet I remain fascinated by the power it can possess of its own volition. Releasing the record in this way, just a couple of weeks after the final note had fallen, felt like a decision made by an outside force yet one I agreed with entirely. Stay safe, friends and I’ll see you on the other side soon. DA xxx”

A2.
Chicks On Speed
Warm Leatherette

B2.
The Normal
Warm Leatherette

Info:
special 12 inch for #LoveRecordStores with cover versions by Laibach, Terence Fixmer, Chicks On Speed % Non plus the original by The Normal.