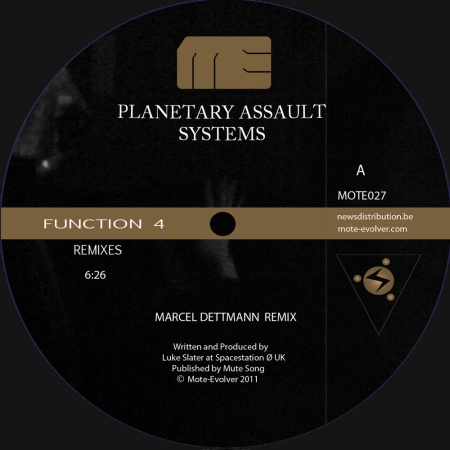 Originally released through Peacefrog in 2000, the tracky, tripping metallic thump of ‘Function 4’ is a  great early example of Slater’s pioneering droning, mesmerising musings as P.A.S. With its chattering hi-hats, gated snares and humming kinetic energy, the original is included here in all its re-mastered glory.

Berghain resident Marcel Dettmann turns in an urgent and driving remix, led by a meandering synth theme that modulates teasingly as the track build. The distinctive voice sample is transformed as if played through a interplanetary P.A, and Dettmann uses expert restrain in introducing the stuttering percussion lines and static FX.

The much loved Chris Liebing delivers a nononsense mix that stays true to the original while enforcing a heavy four-to-the-floor pump throughout. Engineered to excite with its dirty beats, hissing punctuation and subtle builds, Liebing is on form with this heavily functional reshape.

And a message from Luke: “Chris sent me over a version of Function 4 he did earlier in the year, which I really liked and have been playing out a lot. As it turned out Function 4 was an old school favourite among other artists. At the time it was quite different not being a straight 4/4 record, so it’s great to bring it out into the open in a way in 2011.”